Sirmione - the pearl of the islands and peninsulas

Situated on the southern shores of Lake Garda, lies the impossibly beautiful town of Sirmione. Considered a must by many visitors to the region, this picturesque town offers winding cobbled streets, scenic waterfront cafes, a 13th century castle, thermal baths, health spas and springs. It is also home to the crumbling ruins of the Cattulus family villa, recognised as one of the most important Roman sites in northern Italy.

A trip to Lake Grada wouldn't be complete without exploring Sirmione's historic sites and soaking up its irresistible charms.

This quaint town is the perfect place to discover on foot. Although its narrow medieval streets can at times be a little confusing, due to its small size you're never far from where you started!

Start off at Scaligera Castle. This fairy tale castle is one of the best-preserved castles in Italy, in possibly one of the prettiest locations. Surrounded by a moat of turquoise water filled with swans, its 13th century fortified walls, ramparts and towers jut out into the crystal-clear waters of the lake. Climb to the top for a beautiful view of the old town and sparkling moat.

Slightly out of the old town, on the tip of the slim Sirmione peninsula, are the ancient ruins of Grotte di Catullo. The Roman villa on site is believed to have belonged to the Cattulus family and dates from the 1st century B.C.  One of the most important Roman sites in northern Italy, and in an incredibly picturesque location. Admire the crumbling walls as you wander through olive groves surrounded by Garda's waters.

Cool off at Jamaica Beach. This rocky beach near the end of Sirmione's peninsula is one of the best swimming spots in the area, it offers crystal clear water and can be reached by boat or foot.

Discover the relaxing hot thermal springs that Sirminoe has become famous for. The best place to enjoy the water is at Aquaria, idyllic located on the shores of Lake Garda and offering over 10,000 sq meters of thermal spas, spring and whirlpools. Perfect after a long day's exploring.

Sirmione offers no shortage of dining options along its shores and winding streets of the old town. For high end dining head to the Michelin starred La Rucola 2.0. Although pricey this restaurant offers impeccable service, a creative menu and some of the finest food to be found on Lake Garda.

For local fare try La Fiasca. This traditional trattoria is tucked away in a back street just off Sirmione's main square. Here you will find a buzzing atmosphere, hearty dishes made with local produce and packed with flavour.

Also tucked away down a quiet side street is La Nuova Botte. A small pizzeria offering fine pizzas, reasonable prices and speedy service. As well as a really good wine selection.

For lakeside dining try Tancredi Restaurant. This superb restaurant offers fabulous views, modern dining with an Italian twist and impeccable service. For something a little special you wont be disappointed.

Sirmione is conveniently located at the southern end of the lake and is easily accessible from the motorway running east to west across northern Italy. After leaving the motorway follow the main country roads the final few kilometres into town.

The nearest railway stations are located at Peschiera (11km) and Desenzano (10km) Both are accessible via local bus services or a short taxi ride. The nearest airports are found at Verona (30km) Brescia (40km) Bergamo (87km) Venice (159km) and Milan (134 and 174km)

See below our villas and apartment in Simione & surrounding areas 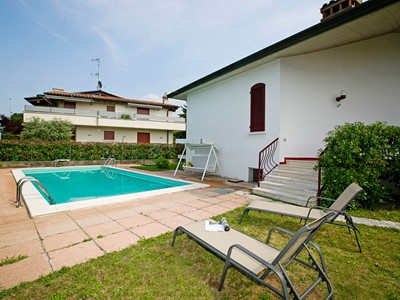 Villa CroceVilla with private pool near Sirmione in Lake Garda 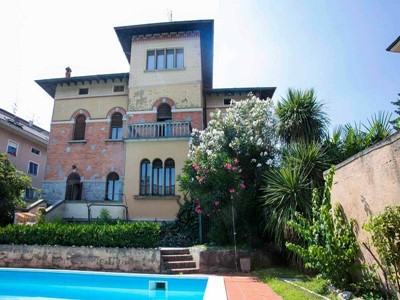